Watch and hear instruments from one of the last great European royal collections to remain intact. 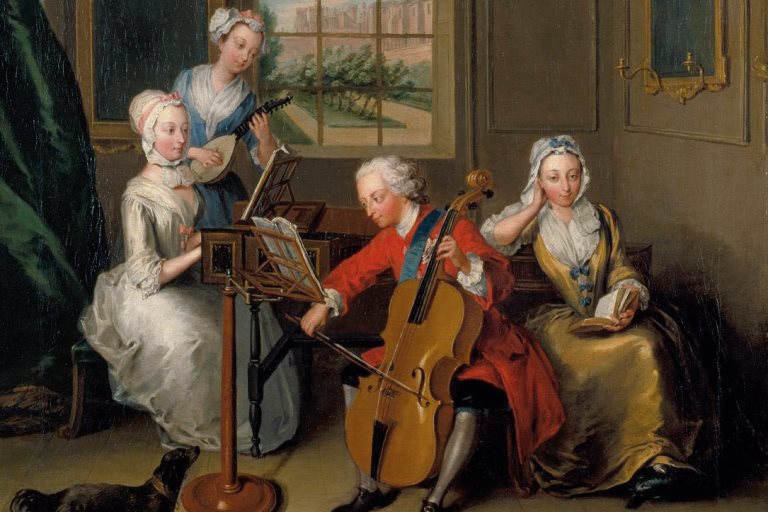 Book tickets for The Early Music Show
Throughout the centuries, many members of the royal family have had very personal relationships with music. Often, they were not satisfied to be mere patrons of leading composers and musicians of the day, but were keen musicians themselves. The Royal Collection is one of the last great European royal collections to remain intact and is held in trust by The Queen as Sovereign for her successors and the nation. It contains many historic instruments with fascinating royal histories.

On 11 February, BBC Radio 3's The Early Music Show will broadcast a special concert from the Grand Reception Room at Windsor Castle. The concert includes performances by Ashley Solomon, Chi-chi Nwanoku and Julian Perkins on historic instruments in the Royal Collection.

Frederick, Prince of Wales and the Burkat Shudi harpsichord

Frederick, Prince of Wales, was the eldest son of George II and Queen Caroline and father to the future George III. He was excluded from both the business of ruling and the public eye and thus used art and music to establish himself amongst the aristocracy and court. Today he is remembered as a great lover and patron of music. Frederick spent his early years in Germany and during his education there he became proficient at the cello and the harpsichord. In London, Frederick was a patron of Burkat Shudi, the most famous of harpsichord makers, and bills show that he purchased spinets (small harpsichords) for Lady Augusta and Prince George. The effect of his encouragement of his children's musical interests is nowhere more apparent than in George III's later patronage of Handel.

For George III, music was of the greatest importance. His tastes were both passionate and conservative. His taste for Handel was resolute and in his later years he would often recall with pride Handel's words, 'while that boy lives, my music will never want a protector'. He gave concerts of Handel's music in the Queen's Presence Chamber, often writing out the programmes in his own hand. He played the harpsichord, pianoforte and the flute. Playing the flute was a consoling activity for the king. During his recovery at Kew in February 1789 he often played to himself, possibly on this porcelain flute.

In 1818 George IV commissioned this organ to be installed in his newly built Music Room at the Royal Pavilion, Brighton. George IV was a consummate fan of the pomp and splendour of state ceremony as well as the merriment of private parties.

In 1850, when Queen Victoria sold the Royal Pavilion, the organ was packed up into 56 pieces and sent to Kensington Palace for storage. Five years later it re-emerged and was installed in Queen Victoria's new ballroom at Buckingham Palace, where it remains today. It was heard publicly for the first time on 2 July 1856 when a concert was given to inaugurate the 'new Ball and Concert-room'.

Music occupied a central place in the lives of Queen Victoria and Prince Albert. It was a shared passion and an art in which they met on equal terms. Their music-making was based around piano duet repertoires and wherever they travelled they would take quantities of sheet music with them. At every palace ? at Balmoral, at Osborne and even on the royal yacht ? there were pianos, the main focus of their music-making at home. Queen Victoria commissioned this elaborately decorated Erard piano in 1856 and it is highly likely that she and Prince Albert would have played on it together.